Communities across the world are gearing up to commemorate World Elder Abuse Awareness Day (WEAAD) this Thursday, June 15th. 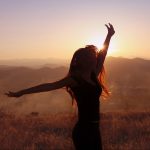 Why I Race: Lindsey’s StoryAwareness